Kevin & Jamie Byrne had created Pinellas County Electric back in 2008, eager to bring a new level of customer relations to the table. PCE handles a wide variety of residential, commercial, and industrial electrical services. Our family-owned and operated business employs only the most trusted and highly skilled electricians throughout the state of Florida. We can provide you with installations, repairs, assessments, and devices to fit every electrical need, when you need them the most. We’ll ensure your home or commercial property has the electrical resources you need, so you’re not left in the dark!

More Than 150 Years of Combined Experience

With more than 150 years of combined experience, our team can deliver the most reliable and professional services in the entire state of Florida. We’re the #1 electrician in Pinellas County, thanks to our experience and our dedication to resolving electrical issues fast and at an affordable rate!

All of our services are backed by our 100% satisfaction guarantee. Our electricians in Pinellas County can install anything from new security lighting for your outdoors to a whole home generator that will keep your appliances working during a power outage. Our installation services are always done promptly and safely.

We understand how difficult it can be at times when your electrical system doesn’t perform or is faulty already. Kevin and his team work hand in hand to come up with solutions to ease your burdens. Electrical issues can quickly develop into major catastrophes. Why wait? Call today for a Free estimate!

Electrical
Wiring, Remodels and Additions, Heat detectors
Generators
Don't fall victim to frequent power outages
Underground Wiring
We can assist you with all of your underground wiring needs
Security Systems
You can view events over a monitor from your home
Panels Changes
Prices that meet your needs and budget
Trouble Shooting
We think before we start working to save you money

As homes and businesses become more dependent on electricity due to advances in technology, it’s more important than ever you’re able to get the services you require. Here are just some of the services provided by Pinellas County Electric:

Technology to Protect Your Property

The safety of your property and the people in it will always come before everything else. Pinellas County Electric offers security lighting as a first-line deterrent against criminals, in addition to alarm system installation, servicing, and 24/7 monitoring. This will help keep your family or business safe and secure at all times.

We don’t have to tell you that the state of Florida is prone to power outages due to inclement weather. This means that having surge protection alongside a trustworthy emergency power generator is paramount for every household and business. The Pinellas County Electric team can install, repair, and upgrade both of these services to protect you from the effects of electrical problems due to bad weather.

Electrical problems can be tricky and interrupt how your property operates. In some situations, what seems like a small problem (like flickering lights or intermittent power) can be symptoms of a much more nefarious and dangerous issue. The electricians at Pinellas County Electric will quickly troubleshoot any problems and provide the best solutions.

The best way to ensure proper installation, repair, and servicing of your property’s electrical needs is by putting your trust in a reputable electrician. Pinellas County Electrical has earned a superior reputation amongst our competitors. Our technicians are professional, our customer service personnel are fantastic… and our owners aren’t too shabby, either!

Contact Pinellas County Electric for All Your Electrical Needs

Pinellas Country Electrical is proud to serve its incredible community. If you have any questions about our services or would like to schedule an appointment with our electricians in Pinellas County, call our staff at (727) 269-1982 today. 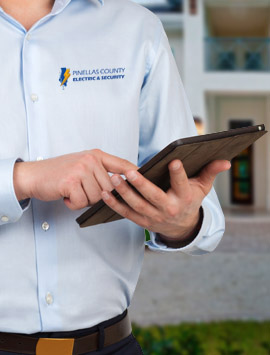 With our new Flat Rate Pricing option you can choose to know exactly what to expect before the job begins, and you’ll never have to be surprised after time and materials are added up. We will work by the job and not the hour. Please ask one of our team members for more details.
Read more 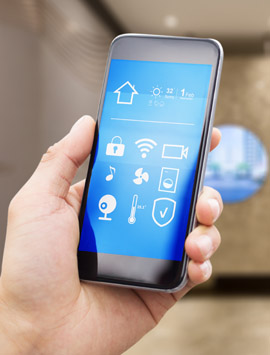 HOW TO MAKE YOUR HOUSE A SMART HOME

Nearly everything in your home — including air-conditioners, thermostats, lights and garage doors — can be connected to the internet and be remotely controlled with a mobile device or smart speaker. Pinellas County Electric now provides these installations.
Read more